It is trivial to install R in Fedora. Just type:

After that you can run R in the terminal. If you want an environment to work in you can use RStudio. I use Emacs and ESS. Everything works nice up until the point you want to install a package — say for example car. It wont work (out of the box). You need to install an additional program. In the terminal:

libcurl is a client-side URL transfer library that you need to install packages in R.

It is also a good idea to install:

NLopt is a library for nonlinear optimization, callable from R. 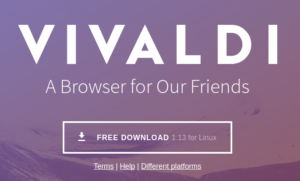 Vivaldi is a great web browser. In fact, it is so great that I now use it as my daily web browser. I will not write about why it is so great (now) — but how to install it. I am using Fedora, and Vivaldi is not in the repositories. So you either have to download it as a rpm from their website or install it through fedy. I used the last option. If you do that you evidently first need to install fedy. This is how you do that:

Go to this site

Copy the code in the terminal. You have to be superuser (sudo). After you have done that and the computer has done it’s thing you install Fedy the normal way:

After you have installed Fedy open the application and install Vivaldi. It is easy, it is a graphical tool.

After installation you will have some problems. You will not be able to see HTML5-videos and not videos using Digital Rights Management (DRM),  for example Netflix. The solution to these problems can be found on ruario’s GitHub page. Regarding HTML5 see here.

If you are on Ubuntu, this is rather easy to fix. To enable HTML5 you need to download chromium-codecs-ffmpeg-extra, which is in the repositories

If you are on Arch the codecs can be found in AUR: vivaldi-ffmpeg-codecs.

If you are not in Ubuntu or Arch it is a little more problematic. But ruario has written a bash-script that works just perfect. On the GitHub page it is also described what is happening. So just scroll down and copy the script. Save it and make it executable. If you have named the file in accordance to rurario’s suggestion (latest-proprietary-media.sh), open the terminal, go to the directory where you want to have the file and enter:

After you have restarted Vivalid you can see movies on for exampel YouTube. Use the arrows to choose the drive. Press ctrl. You will now see a circle with and arrow. Press return to boot into the system. Next time you fire up the computer it will default with the drive you press ctrl over last time. Sorry for the poor quality of this picture!

… I don’t know – but I have used Linux as my main system for more than a year now. My first computer  was a Commodore 64 which was mainly used for playing games. Back in the 1990’s, before we had Internet, my family bought an Olivetti, which had Windows. Ever since then I have used Windows. But back in 2012 I changed OS toOSX, when I bought a Macbook Pro (mid 2012). As a secondary machine I have used Linux since 2010 – mainly Ubuntu. So I have been familiar with Linux for some time now. I never had an idea to change my main system to Linux. But in the early autumn I was starting think about building a server, so I went to the store and bought some computer parts. But then the workload increased massively and there was no time to go further with the project.

In November/December that year the workload decreased some and one weekend I set up the server using Ubuntu as the operative system. During the same autumn Apple upgraded OSX from Yosemite to El Capitan, and with El Capitan Apple introduced System Integrity Protection (SIP), which prevents any user, even the root user, to modify certain files in the system. I had modified ‘certain’ files in Yosemite, especially config files related to Finder. Thus, suddenly Finder did not work as I was used to. I know that SIP can be overrided, and I did. But every time the system updated I had to override it again and do the again do the changes I wanted. So in December the main computer (by then a Macbook pro mid 2014) followed the server and I installed ubuntu, or to be more precise xubuntu, on the computer.

In spring 2016 I changed distro to Fedora, which I use today. There has mainly been no problems at all. The wifi does not work out of the box, but after installing the correct drivers that is not either an issue. As desktop I use Gnome, and after some tweaking really like it. In the picture you can see how my desktop look like. 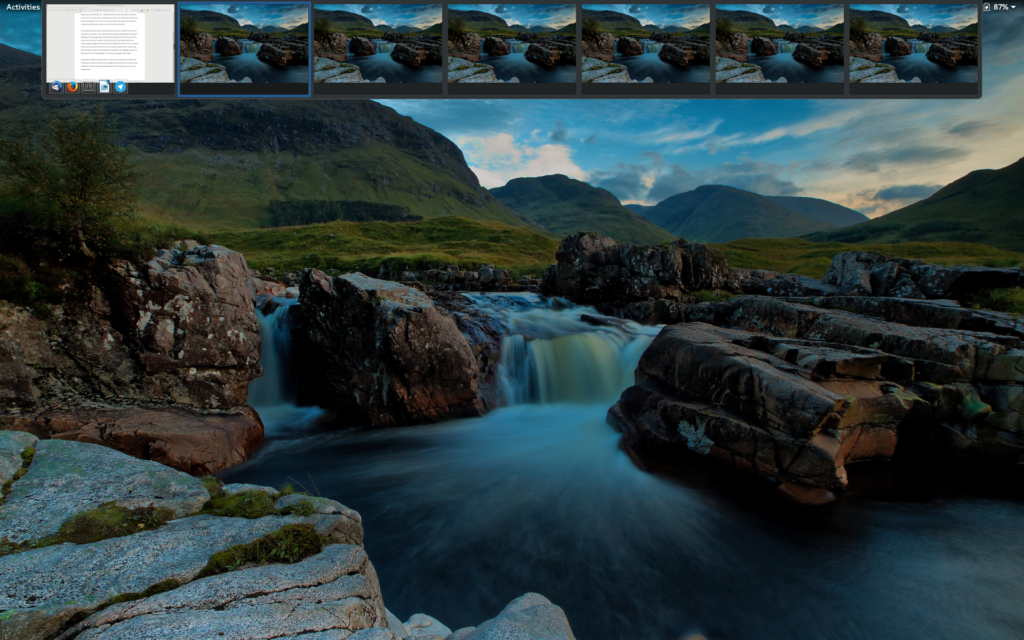 Gnome is not that useful if you are not using extensions. So one of the first things to do is to install gnome-tweak-tool and start installing extensions. As you can see I have a lot of extensions going on my system. I have temperature and fan-speed, a to-do list extension and caffein (which can prevent your computer from going into sleep). I further have places, which list directories on the hard-drive, making it easy to quickly find what I need. I use a dock on the left and a dock up top that displays the workspaces. One of the problems using a Linux system is that not to many uses Linux, especially not at work, and that a lot of the software used in Windows don’t run in Linux. Of course you can use Wine, but that is cumbersome and you miss the point by using open source/free alternatives. In my work this is most noticeable regarding the office packages. The alternative I use I LibreOffice. A lot of people say that the compatibility between Microsoft office package and LibreOffice is problematic. That is not my experience. I work with people using Microsoft Office all time. But for it to work you have to use .doc, not .docx. The only problem I have with LibreOffice is that the alternative to Powerpoint (Impress) is not good. It is almost not possible to use. Instead I use WPS. I actually have the whole WPS package just to use it for presentation. But sometimes I have also used WPS if the compatibility is bad using LibreOffice writer – which can happen if there is a lot going on in the document. For statistics I use R in Emacs (using ESS). Takes some time to get used to Emacs, but when you have it works really nice. I have Virtual Box installed and in VB I have Windows 10 installed. Some system applications that I quite seldom need to use just works in Windows.

Does Linux make me more productive? I don’t know, but the main advantage is that I can have a system of my own liking. So for me Linux works just fine. Should you use Linux as your main work computer? If you are perfectly fine with the system you use and if you are not interested in computers and technology you should probably not use Linux – not yet anyway. But if you want to try I would recommend installing Virtual Box and trying out some of the many distributions.