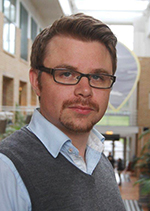 My name is Daniel Larsson and I am an associate professor and the director of studies at the department of sociology, Umeå univeristy. During the last ten to fifteen years I have been teaching in various sociological subjects and fields. I have been teaching sociological and social psychological theory, statistical methods for social science, crime victims (on the police academy) and criminoloigcal theory. I also teach at student at Umeå School of education — and then general sociology such as the impacty of modernity and late modernity, the development of the welfare state and the labour market and the family.

My research interest is mainly focused towards material living condition, poverty, social exclusion and the labor market. The last couple of years I have also focused on the self-employed, but also trust in the police. For the moment I am included in one research project on retirement in the publci sector and on the disability on the labor market. See my research at ResearchGate.

The preferred choice of research method is statistical method. I use R statistics, mainly on a computer running Fedora. I am using Emacs for about everything, from taking notes to writing code (mainly R-code). I also have a GitLab-site where I now and then publish R-codes that are handy and/or have been used on research. Im a rather interested in computers, mainly everything to do with Linux. As my work-station I use a Macbook Pro mid 2014, 16 GB RAM, 3 GHz intelcore i7-processor with a 500 GB SSD-drive. On that computer I run the latest Fedora which I double boot with MacOS. I have another MacBook Pro which I also double boot between Fedora and MacOS. That computer is from mid 2012, having 8 Gb Ram, 3.6 Ghz intel core i7 processor and a 700 Gb HDD-disk. I have an old HP (from 2008) running running Debian (testing) using I3 and xfce4 as GUI. I have some more computers, but these are the one I regular use and work with.